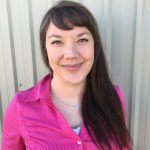 Charis (Logan) Aguirre grew up in Westlock, Alberta.  Her love for music began as a young girl as she began to take piano lessons.  By the time Charis reached junior high, she had grown an interest for, not only piano, but also drums and percussion.  She loved her musical experience in school band and chose to further her musical skill by participating in a 2 year music program in Red Deer, Alberta while still finishing her high school course in Westlock.  After graduating from high school, Charis went on to finish her diploma in Drum Performance through Grant MacEwan University, while also performing for some years with the New Edmonton Wind Sinfonia.

After finishing her diploma, she went on to teach drums and piano overseas in Egypt for one year.  Upon returning to Canada, Charis joined forces with Carol-Lynne and Jeff Quinn to launch a rock band called Rend.  After recording Rend’s first album and touring with them in Western Canada, Charis decided to focus her energies on teaching music and starting True North Music School.  Charis has been teaching music for over 18 years and performing for over 21, and is passionate about music and raising up the next generation to pursue their musical dreams! She is excited to be a part of inspiring and building the music culture of the Pembina Hills regions and beyond.